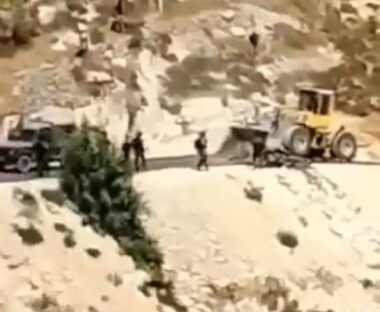 Israeli soldiers invaded, Tuesday, the town of Battir, west of Bethlehem city, south of the occupied Palestinian capital, Jerusalem, in the West Bank, and bulldozed a paved road.

Omar al-Qaisi, a local nonviolent activist against the Israeli Annexation Wall and Colonies, said the soldiers invaded the Karem Hadidoon area in basin Baten Abu Hasan, in the eastern part of the town.

He added that the Israeli military bulldozers then bulldozed and destroyed a 1-kilometer long road used by the Palestinians.

Many Palestinians gathered in the area and protested the attack before the soldiers assaulted and injured Zaki al-Batma, 60, a member of Battir Town Council, in addition to a council employee, identified as Sa’id Abu Harthiyya.