WAFA: “Nine Palestinians, including a Sheikh Jarrah activist, detained by Israeli forces in the occupied territories” 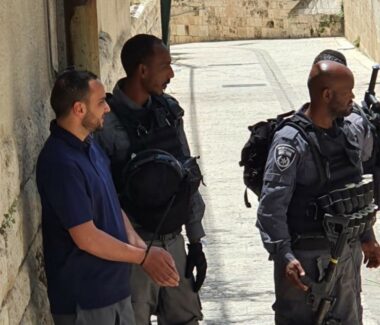 By WAFA News: Israeli occupation forces today detained at least nine Palestinians from various parts of the occupied territories, including an activist from Sheikh Jarrah neighborhood in East Jerusalem, according to local and security sources.

In Sheikh Jarrah neighborhood of occupied East Jerusalem, Israeli police raided the home of Murad Atyeh, 26, one of the activists in the neighborhood against Israeli plans to displace many families and take over their homes for the benefit of Israeli settlers and detained him.

During the ensuing confrontations, the soldiers opened fire towards local youths who attempted to block their passage, wounding and detaining one.

In the southern West Bank, Israeli forces raided Husan village, west of Bethlehem, where they detained another.

Elsewhere in the southern West Bank, the soldiers conducted a raid into Dura town, south of Hebron, where they arrested two former prisoners.