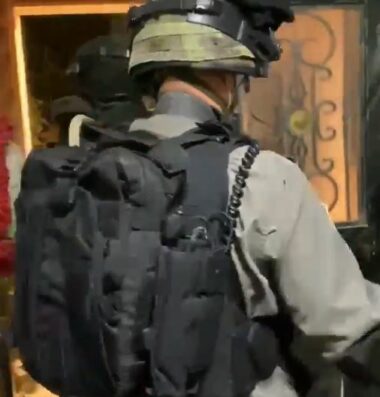 Israeli soldiers abducted, on Wednesday at dawn, five Palestinians, after the soldiers invaded and ransacked many homes in the al-Fawwar refugee camp, south of the southern West Bank city of Hebron, and Sa’ir town, southeast of the city.

The Palestinian Prisoners Society (PPS) has reported that the soldiers abducted Jawad Ziad Hdeib, Ibrahim Ali Abu Warda and Hasan Akram Zaghmout, from their homes in the al-Fawwar refugee camp.

It added that the soldiers also abducted Ali Mousa Jaradat, after storming and ransacking his property, in addition to the homes of his parents and his brother, Shadi.

In addition, the soldiers abducted Mo’tasem Yousef Madi, 28, from the al-‘Arroub refugee camp, while he was working in Jerusalem.

It is worth mentioning that, on Tuesday evening, illegal Israeli colonists invaded Palestinian orchards in Tal Romedia area, in the center of Hebron city, before harvesting many olive trees and stealing the produce.

In related news, the soldiers abducted six Palestinians, including one woman, after the army stormed and ransacked many homes in Kobar town, and Umm as-Sharayet neighborhood in al-Biereh city, in the central West Bank governorate of Ramallah.