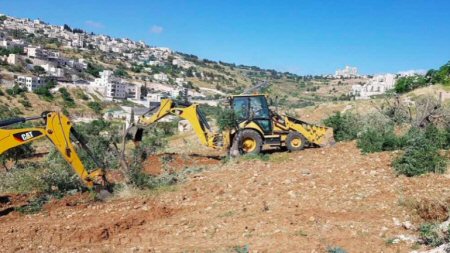 In the Governorate of Hebron, in the southern West Bank, on Tuesday, separate attacks by Israeli soldiers and Israeli paramilitary settlers targeted Palestinian olive farmers and their lands — during a time of year when the olive harvest is at its height.

The first attack took place Tuesday morning, as Israeli forces bulldozed Palestinian farmland south of Hebron, in the villages of ad-Dhahiriya and Idhna.

The Palestinians whose land was destroyed were all members of the al-Jabareen family. Israeli forces carried out the destruction despite the fact that the Palestinian owners hold legal title deeds to their land.

In addition to bulldozing the farmland, the Israeli troops also destroyed a water irrigation system in the al-Layya area in the north of Idhna village.

Also in Hebron, Tuesday, Israeli paramilitary settlers invaded a Palestinian home in the Old City of Hebron and began occupying it to take it over for colonization.

The Youth Against Settlements group published videos documenting the settlers’ storming of a house in the Old City, located in the area of ​​the old vegetable market in Hebron, where Palestinian citizens are prevented from accessing it, due to the occupation closure policy.

He also published a video explaining the settlers’ theft of the olive harvest in the Tel Rumeida area, and that the land belongs to the Al-Bakri family, which extracted a final decision from the Israeli Supreme Court to evacuate the house from the settlers.

According to the Ma’an News Agency, Dr. Ahmed Amr, coordinator of the Youth Against Settlements Association, told their reporters that they have been told by the Israeli settlers in Hebron that the colonizers will try to use the remaining two months in the administration of US President Donald Trump to steal Palestinian lands and homes and escalate attacks on Palestinian citizens and their property.

In addition, Amr told reporters that the Israeli army facilitates the theft of land and property by Israeli colonial settlers, and prevents Palestinian residents from defending themselves and their property from the Israeli settler invasion.

Amr told Ma’an that it is up to the Palestinian leadership and international supporters to develop a plan that will ensure the protection of Palestinians and their property.