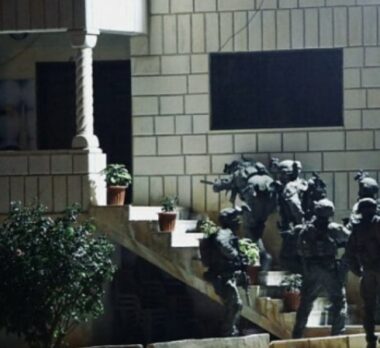 Israeli soldiers abducted, on Tuesday at dawn, at least seventeen Palestinians from several parts of the occupied West Bank, including the occupied capital, Jerusalem, after the army invaded and ransacked dozens of homes.

In occupied Jerusalem, the soldiers abducted Ward Ma’moun Oweis and Saif Oweis, from their homes in the Ras al-Amoud neighborhood.

Also in Jerusalem, the soldiers abducted Mohammad Khaled from his home in Qalandia refugee camp, north of the city.

The soldiers also installed many roadblocks in Hebron city, in addition to the main entrances of Sammoa’, Sa’ir, and Halhoul towns, and the al-Fawwar refugee camp, in the Hebron governorate, before stopping and searching dozens of cars.

In Jenin, in northern West Bank, the soldiers abducted Ibrahim Ahmad Abu M’allah, from Qabatia town, south of the city, after stopping him at a military roadblock near the Arab American University where he studies.

It is worth mentioning that the soldiers also invaded Nabi Elias village, east of the northern West Bank city of Qalqilia, and demolished an agricultural shed owned by Rezeq Farid Abu Sa’ad.