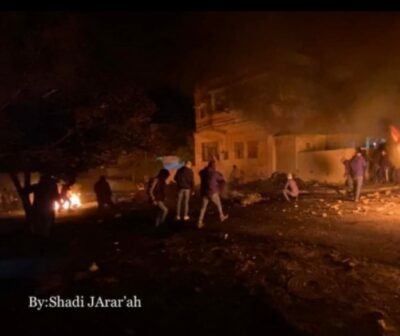 Israeli soldiers injured, on Monday at night, at least twenty Palestinians during protests that took place after the army invaded Burqa village, northwest of Nablus, in the northern part of the occupied West Bank.

The Palestinian Red Crescent Society (PRCS) said its medics provided treatment to seventeen Palestinians who suffered the effects of year gas inhalation, in addition to one who was shot with a rubber-coated steel bullet and two who suffered burns due to Israeli concussion grenades.

Ghassan Daghlas, a Palestinian official who monitors Israel’s illegal colonialist activities in northern West Bank, said the protests erupted after the soldiers installed a roadblock at the entrance of the village, before stopping and searching dozens of cars.

Daghlas added that the Israeli army continued the closure of the main Jenin-Nablus Road for the 34th consecutive day, directly impacting the lives and the freedom of movement of more than 35.000 Palestinians living in surrounding villages.

In addition, the soldiers invaded the eastern area of Nablus city, especially the al-Ghawi junction, and fired many live rounds and gas bombs at the Palestinians to force them to leave so that groups of illegal colonizers reach Joseph’s Tomb in the city.

Ultra-orthodox and nationalist Jews constantly try to visit the shrine without approval, as many Jews believe the tomb to be the final resting place of the biblical figure in the Old Testament. Palestinians believe that Joseph’s Tomb is the funerary monument to Sheikh Yousif Dweikat, a local religious and social figure.

In related news, the soldiers invaded the town of Beita, south of Nablus, and caused a family to suffer the effects of tear gas inhalation