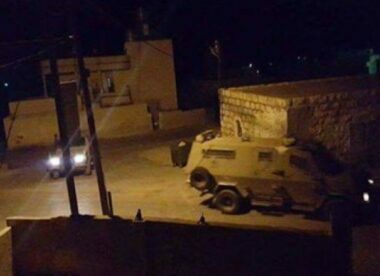 Israeli soldiers invaded, on Monday evening, the town of Beita, south of the northern West Bank city of Nablus, and caused a family to suffer the effects of tear gas inhalation after the army accompanied dozens of illegal colonizers into the town.

Media sources said many army jeeps invaded the town to accompany dozens of illegal colonizers into the area, leading to protests.

They added that the soldiers fired several live rounds, rubber-coated steel bullets, and gas bombs at the Palestinians and surrounding homes.

Ahmad Jibril, the head of the Emergency Department of the Palestinian Red Crescent Society (PRCS) said many gas bombs struck a Palestinian home in the town, causing an entire family, including children, to suffer the effects of tear gas inhalation.

In related news, the soldiers abducted Ahmad Khaled Hamad, 28, from the Qalandia refugee camp, north of occupied Jerusalem, while working in the nearby Kafr ‘Aqab neighborhood.

Also on Monday evening, the army injured eighteen Palestinians in Burqa village, northwest of Nablus, and invaded many surrounding communities before storming shops and a gas station, and confiscating surveillance recordings, in several parts of the governorate.

Earlier Monday, the soldiers killed a young Palestinian man, identified as Faleh Mousa Jaradat, 39, at the Etzion Junction, south of Bethlehem in the occupied West Bank, after an alleged stabbing attempt. Falah was from Sa’ir town, northeast of Hebron.