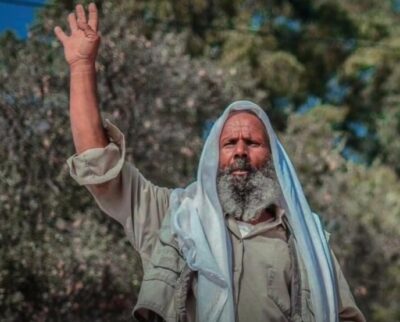 The Palestinian Health Ministry has confirmed, on Monday morning, that an elderly man, who was seriously injured after an Israeli tow truck ran him over in the Um al-Khair area of Masafer Yatta, south of Hebron in the southern occupied West Bank, earlier this month, has succumbed to his injuries.

The ministry stated that Suleiman al-Hathalin, 75, remained in the Intensive Care Unit at the al-Mezan Hospital in Hebron city until he succumbed to the serious wounds he suffered on January 5th, 2022.

Al-Hathalin, 75, a well-known activist from the Um al-Khair area was rammed with a military truck during nonviolent protests that took place after the soldiers invaded Masafer Yatta, causing him to suffer a critical skull fracture.

His injuries were extensive, largely to the head, chest, abdomen, and pelvis, medical sources at the al-Mezan hospital have confirmed.

Fuad l-Amour, the Coordinator of the Protection and Steadfastness Committees in Masafer Yatta, stated after the elderly man was rammed and seriously injured, the army invaded the area, accompanying a tow truck, and seized several Palestinian-owned vehicles, leading to protests.

He added that local Palestinians gathered in the area to stop the Israeli army from confiscating their privately-owned vehicles when the tow truck drove over Suleiman.

His family said it will be filing a suit against the Israeli police for the excessive use of force against him, especially since he was repeatedly assaulted and abducted by the soldiers and the police, in various previous attacks, despite his old age and frail body. Suleiman was a prominent figure and has been part of ongoing protests, especially after Israel confiscated Palestinian lands in the 1980s, and built the illegal Carmiel colony. The Israeli army previously demolished Suleiman’s home after alleging the property was “close to Carmiel” colony which was built on stolen Palestinian lands.

Suleiman’s family was displaced from the Arad area in the Negev desert when Israel was established in the historic land of Palestine in the year 1948.

The family then moved to the area east of Yatta town, south of Hebron, and in the year 1965 they bought the land where they built and resided, however, Israel illegally annexed Palestinian lands, including part of Suleiman’s land, and built the illegal Karmiel colony in the year 1980, and has since been expanding it by further theft of land.