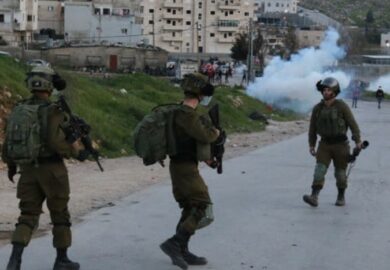 Israeli soldiers injured, on Monday evening, eighteen Palestinians in Burqa village, northwest of the northern West Bank city of Nablus, and invaded many surrounding communities before storming shops and a gas station, and confiscating surveillance recordings, in several parts of the governorate.

He added that a young man was shot with a rubber-coated steel bullet and at least seventeen Palestinians suffered the effects of tear gas inhalation.

Daghlas also said that protests also took place near Anza village, and at the main entrances of Jaba’s town, south of Jenin.

Dozens of soldiers were also deployed near Ya’bad, Anza, Arraba, Marka, Sanour, az-Zawiya, Jaba’, and Ejja in the Jenin Governorate, before closing many roads.

In Jaba’ town, southwest of Jenin, the soldiers stormed a gas station and many shops before conducting violent searches, and confiscated surveillance recordings, leading to protests.

In related news, dozens of illegal colonizers, accompanied by soldiers invaded the site of an evacuated small colony, after the army closed the entire area and its surroundings to the Palestinians.

Earlier Monday, the soldiers killed a young Palestinian man, identified as Faleh Mousa Jaradat, 39, at the Etzion Junction, south of Bethlehem in the occupied West Bank, after an alleged stabbing attempt. Falah was from Sa’ir town, northeast of Hebron.