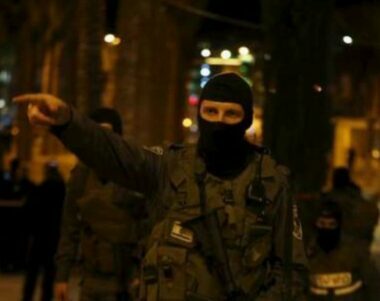 Israeli soldiers abducted, on Monday at dawn, several Palestinians in the Jenin governorate, in northern West Bank, and injured many others.

Media sources said the soldiers stormed and ransacked dozens of homes, especially in Kafr Dan village, including the home of Ayham Kamamji, one of six Palestinian detainees who managed to escape from Gilboa Israeli prison (four of them has been captured).

The soldiers invaded and ransacked the home of Kamamji, looking for him, and interrogated his family and relatives, before abducting one of his nephews.

In addition, the soldiers invaded the al-Yamoun nearby town, searched homes, and abducted Kaisar Kamamji, the cousin of Ayham, in addition to searching and ransacking several other homes in the town, and the al-‘Arqa nearby village.

Furthermore, the soldiers invaded Ya’bad town, before surrounding and storming the home of Monadel Enfei’at, and ransacked the property while interrogating his family. Monadel is also one of the six detainees who escaped from Gilboa, and the army is still looking for him.

It is worth mentioning that protests took place during the invasions into Ya’bad, Kafr Dan, and al-Yamoun; medical sources reported dozens of injuries among the Palestinians, especially due to the effects of tear gas inhalation.