Israeli Soldiers Abduct Three Palestinians In Bethlehem, One In Ramallah 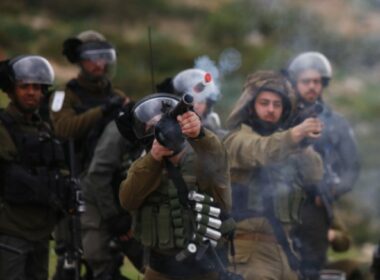 Israeli soldiers abducted, on Monday at dawn, three Palestinians and assaulted several others, from Bethlehem governorate, south of the occupied Palestinian capital, Jerusalem, and one near the central West Bank city of Ramallah, in the West Bank.

They added that the soldiers were looking for a young man from the Shouka family, but could not locate him.

Two other Palestinians, identified as Yousef Mahmoud Lahham, 45, and Ezzeddin Mowaffaq Badawna, 33, were abducted from their homes after the soldiers invaded the Deheishe refugee camp, south of Bethlehem, and ‘Aida refugee camp, north of the city.

In related news, the soldiers invaded Ni’lin town, west of Ramallah, searched and ransacked homes, before abducting a nonviolent activist against the Annexation Wall and Colonies, identified as Mohammad Abdul-Qader ‘Amira.

The family said the soldiers also confiscated their son’s mobile phone during the violent search of their property.

Furthermore, the soldiers abducted several Palestinians in the Jenin governorate, in northern West Bank, and injured many others.

On Sunday at night, the soldiers abducted three Palestinian children in the at-Tour town, east of occupied East Jerusalem, and stormed the al-Makassed Hospital.