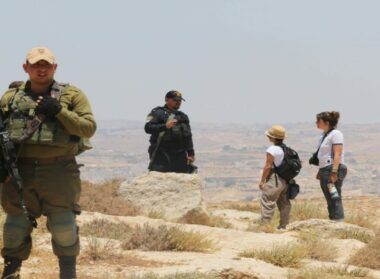 Israeli soldiers attacked, Friday, the weekly procession against the illegal Israeli colonialist activities in the Masafer Yatta area, south of Hebron, in the southern part of the occupied West Bank, wounding dozens in addition to abducting five Palestinians and one international peace activist.

Rateb Jabour, the coordinator of the National and Popular Committees in southern Hebron, said the soldiers prevented the Palestinians from holding noon prayers on their lands in Um ash-Shaqhan area in Masafer Yatta.

Jabour added that the soldiers fired a barrage of gas bombs and concussion grenades at the residents and assaulted many of them with clubs and rifle-butts, wounding a few, including an elderly man, identified as Ali Jabarin, before the medics rushed him to a hospital in Hebron.

Dozens of nonviolent protesters suffered the effects of tear gas inhalation, while the soldiers also abducted five Palestinians, in addition to one international solidarity activist.

The Palestinians and the solidarity activists were holding a nonviolent procession on Palestinian land that Israel is trying to illegally annex to build and expand its illegal colonies.