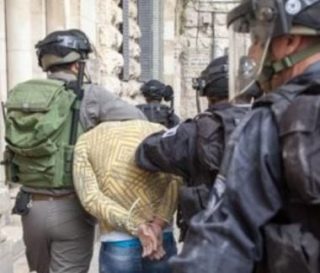 They added that the two were moved to an interrogation center in the city, after the army cuffed and blindfolded them.

In addition, the soldiers abducted an elderly Palestinian man while crossing Hizma military roadblock, allegedly for “carrying a knife,” and took him to Atarot military base.

The man has been identified as Samir Roweidi, from Silwan town, south of the Al-Aqsa Mosque, in Jerusalem, the Wadi Hilweh Information Center in Silwan (Silwanic) has reported.

On Sunday at dawn, the soldiers abducted a former political prisoner, after invading his home in Beit Ummar town, north of Hebron, in the southern part of the occupied West Bank.