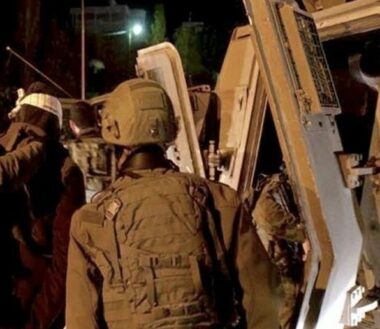 On Wednesday at dawn, Israeli soldiers abducted twelve Palestinians in several parts of the occupied West Bank, including seven from the southern West Bank governorate in Hebron.

The soldiers also abducted a young man, identified as Dia’ Samara, from his home in the ath-Thaheriya town, south of Hebron, in addition to Tha’er Jamil Midya and Ibrahim Khalil Aqel, from Halhoul town, north of Hebron, after stopping them at the Container military roadblock, southeast of occupied Jerusalem.

Another Palestinian, a former political prisoner, identified as Jamal Akram Ajaj, was abducted from his home in Saida town, north of Tulkarem, in the northern part of the West Bank.

In addition, several Israeli army vehicles invaded the town of Silwad, northeast of the central West Bank city of Ramallah, searched homes, and before abducting Yassin Sobhi Hamed, along with his sons, Emad, 22, and Ahmad, 18. The soldiers also invaded several communities in the Ramallah governorate.

On Tuesday evening, Israeli soldiers assaulted and abducted two young Palestinian men, identified as Firas Reshiq and Mohye Reshiq, from the Sa’adiyya neighborhood in Jerusalem’s Old City, after stopping and attacking them in Bab al-Amoud.