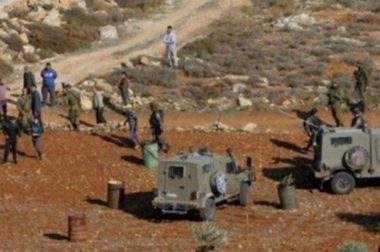 The Israeli army has issued orders, Sunday, for the illegal annexation of 511 Dunams (123.5 Acres) of privately-owned Palestinian lands near the northern West Bank city of Nablus, to expand an illegal colony in the area.

Ghassan Daghlas, a Palestinian official who monitors Israel’s illegal colonialist activities in northern West Bank, said the army has decided to confiscate 511 Dunams from Basin #15 in the Palestinian areas of Khallet Sheikh Ahmad and al-Mashaleh, owned by Palestinian residents of Burin, Iraq-Burin and Kafr Qallil villages, near Nablus.

He added that the annexation is part of Israel’s plan to expand its illegal Bracha colony, which was built on Palestinian lands.

All of Israel’s colonies in the occupied West Bank, including those in and around occupied East Jerusalem, are illegal under International Law, the Fourth Geneva Convention and various United Nations and Security Council resolutions.

Article 49 of the Fourth Geneva Convention of 1949 states that “The occupying power shall not deport or transfer parts of its own civilian population into the territory it occupies.”

In its additional protocol, Article 84 (4) (a) of 1977, it states that “the transfer by the Occupying Power of parts of its own civilian population into the territory it occupies is a grave breach of the Protocol.”

Article 8 (2)(b)(viii) of the 1998 International Criminal Court (ICC) Statute states that “the transfer, directly or indirectly, by the Occupying Power of parts of its own civilian population into the territory it occupies constitutes a war crime in international armed conflicts.”