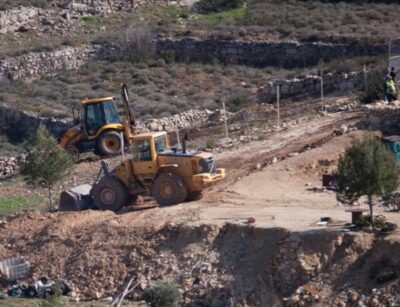 Israeli soldiers continued Thursday, the bulldozing of Palestinian lands, the uprooting of dozens of trees, and the demotion of retaining walls near Sarta village, west of Salfit, in the central part of the occupied West Bank.

The lands, subject to the Israeli violations over the last several days, are in the Ezbet Abu Adam area, in the eastern part of Sarta village.

The Mayor of Sarta, Ibrahim Khatib, stated that Israel has been uprooting privately-owned Palestinian lands and demolishing retaining walls to install water pipelines and to pave a 12-meter-wide and 15-kilometer-long segregated road leading to the illegal Burkan colony on large areas of stolen Palestinian lands in the village.

Khatib added that the work is conducted by the “Mekorot” Israeli “national water company,” which controls the Palestinian water resources in the occupied West Bank.

“So far, they have demolished several retaining walls made of rocks and cement walls…,” he said, “they also uprooted ten almond trees and at least 150 olive trees in the same area.”

Report by Amnesty International, published on November 29, 2017: “The Occupation of Water:
The legacy of Israel’s 50-year occupation of the Palestinian territories has been systematic human rights violations on a mass scale. One of its most devastating consequences is the impact of Israel’s discriminatory policies on Palestinians’ access to adequate supplies of clean and safe water.

Soon after Israel occupied the West Bank, including East Jerusalem, and the Gaza Strip, in June 1967, the Israeli military authorities consolidated complete power over all water resources and water-related infrastructure in the Occupied Palestinian Territories (OPT). 50 years on, Israel continues to control and restrict Palestinian access to water in the OPT to a level which neither meets their needs nor constitutes a fair distribution of shared water resources.”  Read Full Report