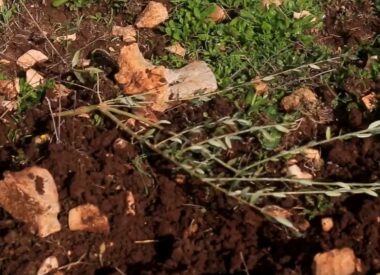 On Wednesday, a group of illegal Israeli colonizers uprooted 110 Palestinian olive saplings in Bruqin town, west of Salfit, in the central West Bank.

He added that he had been working to rehabilitate his 14 Dunams of land for the past several years to plant them.

In addition, the colonizers cut twenty-five olive saplings in an orchard, owned by Mahmoud Sheikh Omar, in the al-Matwi area, east of Bruqin.

Salfit governor, Abdullah Kamil, denounced the constant Israeli violations, especially since the colonizers are encouraged by the complicity of the Israeli occupation army and the Israeli government.

He stressed the importance of holding Israel and its colonists accountable for the ongoing crimes against the Palestinian people and their property.

Kamil stated that olive trees are an essential part of the Palestinian heritage, history, and culture and are among the main targets of the dangerously escalating Israeli crimes.

He called on all official and private sector organizations to provide the needed support to the farmers, especially in the vast areas where their lands are not only subject to these violations but are also facing illegal annexation due to Israel’s illegal colonialist activities and its support to the colonists who continue to commit these serious crimes.