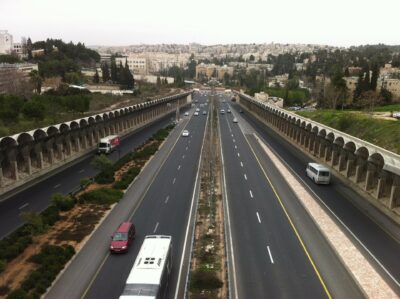 Israel has approved a 1 billion shekel ($310 million USD) plan to connect the illegal settlements in occupied East Jerusalem with neighborhoods in West Jerusalem with the goal of consolidating the occupation, according to a report by Radio Bethlehem and Kol Ha’ir.

The Finance Committee for Occupation Municipality has approved these plans and programs in order link neighborhoods in West Jerusalem with the illegal settlements in East Jerusalem. The plan includes expansion of the light rail, roads and infrastructure construction and replacement.

53 million shekels are slated to build the “American Bypass” road which would be a path from Jabal Al-Mukabber to the Ain Al-Lawza junction.

Plans include building sidewalks, widening the road, building retaining walls to separate the road from the neighborhoods it will pass through, and sewage and water replacement. This project and others like it have historically created even more travel difficulties for Palestinians and in particular the American Bypass road, which was a project started in the 1960’s. In 2020 the American Road was criticized as “de-facto annexation” by Daniel Seidemann, a lawyer representing Palestinian families who suffered due to the construction.

“What we are seeing here is, again, the seamless integration of the northern West Bank, East Jerusalem under sole Israeli control, and the southern West Bank for the purposes of the settlers,” said Seidemann. According to a report by Reuters in 2020.

Construction will likely affect Palestinian communities in East Jerusalem as well as in surrounding areas including the allocation of 17.1 million shekels to modernize and expand the road in Beit Hanina heading to the west side of Jerusalem to help facilitate “movement of settlers from the settlements of Bizgat Ze’ev and Nabi Yaakov”, and 22.6 million shekels for the expansion of the street in the Gilo settlement – construction that will affect Palestinians as it will connect with the Begin-Jerusalem-Tel Aviv highway.

These new roads may pose another difficult question for the international community and for Israelis. In 2019, Route 4370 opened, a segregated highway built with the intention of ease of movement for settlers and engendered criticism as it is referred to as the “Apartheid Road”, built to separate via a wall in the highway, settlers and Palestinians, who are not allowed to enter Jerusalem, Haaretz reported.

– A highway in Jerusalem, image by Shuraki, posted on Pixabay