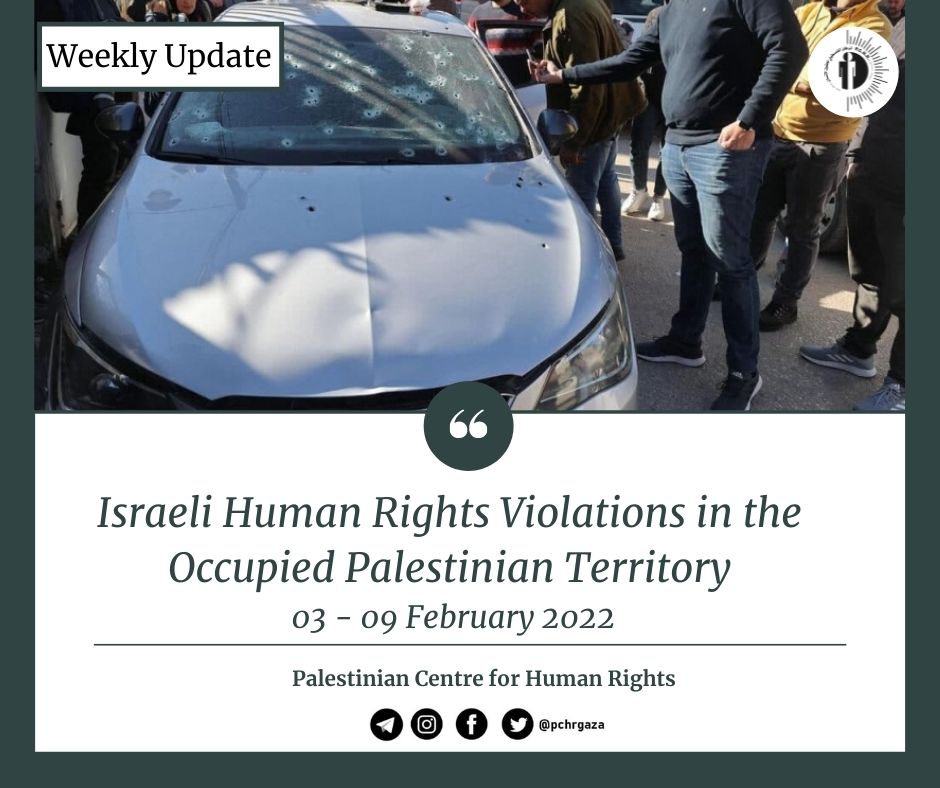 Violation of right to life and bodily integrity

So far in 2022, IOF attacks killed 5 Palestinians and wounded 47 others, including 8 children and 4 journalists, all in the West Bank.”

Since the beginning of 2022, Israeli occupation forces made 21 families homeless, a total of 128 persons, including 23 women and 50 children. This was the outcome of IOF demolition of 27 houses and 3 residential tents. IOF also demolished 11 other civilian objects, and delivered 12 notices of demolition, cease-construction, and evacuation.”

So far in 2022, IOF conducted 697 incursions into the West Bank, including occupied East Jerusalem, during which 444 Palestinians were arrested, including 35 children and 6 women.”

Settler-attacks on Palestinian civilians and their properties

This week, 7 settler-attacks were reported in the West Bank, resulting in 6 Palestinians sustaining bruises, and the uprooting of 150 olive trees.

So far this year, settlers carried out 21 attacks on Palestinians and their properties in the West Bank.”

Israeli closure policy and restrictions on freedom of movement

Israeli occupation maintains its illegal and inhuman 15-year closure on the Gaza Strip. Details available in PCHR’s monthly update on the Gaza crossings.

In the West Bank, including occupied East Jerusalem, IOF continues to impose restrictions on the freedom of movement.

On top of its 108 permanent checkpoints, IOF established 63 temporary military checkpoints this week and arrested 4 Palestinians at those checkpoints. The majority of the checkpoints were in Hebron (31) followed by Bethlehem (11).