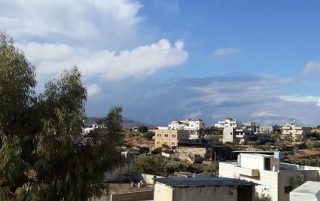 Israeli soldiers invaded, on Tuesday, the village of Douma, south of the northern West Bank city of Nablus, and handed demolition orders targeting two homes, and a carpentry workshop.

The WAFA News Agency quoted Adeeb Dawabsha, the deputy mayor of Douma village, stating that the army is alleging the properties were built without constriction permits.

He added that the two homes, and the carpentry workshop, are owned by local Palestinians of the Dawabsha family.

Douma is located in Area C of the occupied West Bank, under full Israeli control, but the Civil Administration, run by the army in the occupied West Bank, rarely issues construction permits, while Israel continues the construction and expansion of its illegal colonies, built in direct violation of International Law and the Fourth Geneva Convention.

Expanding Palestinian families find themselves unable to find residences, and some start building in their own lands, without the approval of the occupation authorities, due to the lack of other alternatives.

Area C is more around %60 of the occupied West Bank under the Oslo Interim Agreement that was signed in 1995 between Israel and the Palestinian Liberation Organization (PLO). The agreement divided the West Bank into three main areas, A, B and C — More than 300.000 Palestinians live in area C, while 360.000 Jewish settlers live in 135 illegal colonies, and 100 outposts, in direct violation of International Law.

The United Nations Office for the Coordination of Humanitarian Affairs (PCHA) said in a report that the Israeli “Civil Administration” has issued 14.000 demolition orders against Palestinian homes and structures, in the period between 1988 and 2014 – 11.000 of these orders are still outstanding.

The report also indicated that the Israeli zoning laws applied in the occupied West Bank, are rendering it largely impossible for the Palestinians to obtain construction permits in the majority of Area C.

Israel classified 70% of Area C (44% of the West Bank) as areas for its illegal colonies, firing and training zones for the army, and as ‘natural reserves’ – all completely off limited to the Palestinians.

The remaining 30% of Area C, where the Palestinians are allowed to build, are subject to very strict Israeli laws that make only 1% of it eligible for Palestinian development.

Under the Oslo Accords, Israel was supposed to gradually transfer Areas B and C to the Palestinian Control (Area A) but instead, kept illegally confiscating Palestinian lands to build and expand its colonies and military bases, dividing the West Bank into 277 isolated enclaves.