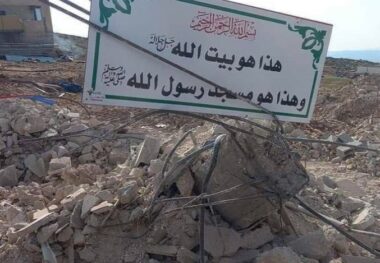 On Monday, Israeli soldiers demolished a mosque in a Palestinian village near Hebron, in the southern part of the occupied West Bank.

The sources added that the soldiers demolished the local Rasoul Allah Mosque (The Prophet of God Mosque), roughly about 100 square meters.

Khallet Taha is one of the several areas in Hebron targeted by illegal Israeli colonialist activities, especially since Israel is trying to annex 3000 Dunams of Palestinian lands to expand the illegal Nagihot colony, built on stolen Palestinian lands.