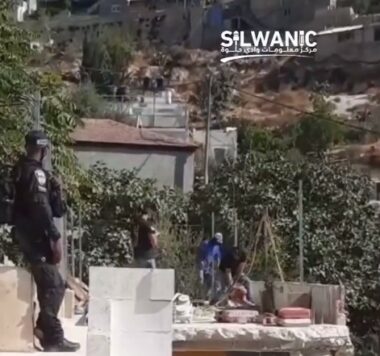 It is worth mentioning that Matar was previously forced to demolish a part of his home under the pretext of being built without a permit; Mohmmad has been filing appeals to prevent the destruction of his property.

Abu Diab added that the soldiers also forced several stores shut, and harassed many Palestinian children while walking to their school.

The soldiers also prevented many Palestinians, including schoolchildren, from leaving the neighborhood during the invasion.

In addition, dozens of soldiers and police officers, accompanied by personnel of the City Council in Jerusalem, invaded Silwan and posted demolition orders targeting homes and structures.

The Wadi Hilweh Information Center in Silwan (Silwanic) stated that five Palestinian families in Silwan, Jabal al–Mukabber and Beit Hanina, had to demolish their own homes in September, to avoid the excessively high fines and fees imposed by the City Council, in addition to the demolition costs if the city uses its workers and equipment.