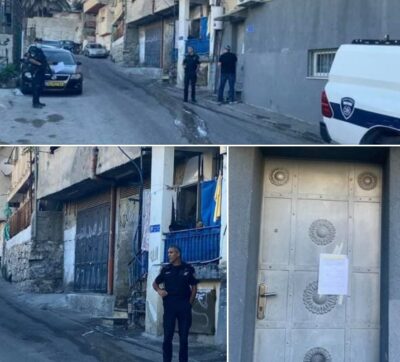 On Wednesday morning, dozens of Israeli soldiers and police officers, accompanied by personnel of the City Council in occupied Jerusalem, invaded Silwan town, south of the Al-Aqsa Mosque, and posted demolition orders targeting homes and structures.

Fakhri Abu Diab, the spokesperson of the Silwan Lands Committee, stated that the soldiers and the city council workers invaded the al-Bustan neighborhood, before posting demolition orders on the walls of several homes and structures.

Abu Diab added that one of the homes does not only predate Israel, but was also was built dozens of years ago, and is considered one of the inhabited historic landmarks of the town.

He also said that the Palestinians were given until November 5th to filed appeals with the city.

The Wadi Hilweh Information Center in Silwan (Silwanic) stated that five Palestinian families in Silwan, Jabal al–Mukabber and Beit Hanina, had to demolish their own homes in September, to avoid the excessively high fines and fees imposed by the City Council, in addition to the demolition costs if the city uses its workers and equipment.