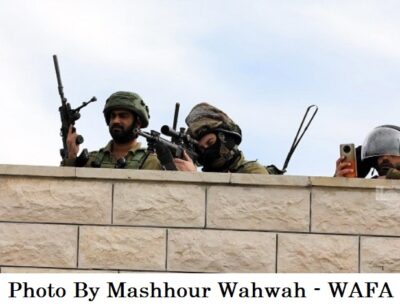 On Friday, Israeli soldiers shot a young man and caused many Palestinians to suffer the effects of tear gas inhalation in Beit Ummar town, north of Hebron, in the southern part of the occupied West Bank.

Several army jeeps invaded the town and attacked a nonviolent procession organized by several factions and civil society institutions demanding the release of the bodies of slain Palestinians killed by the soldiers in previous invasions.

Medical sources said the soldiers shot a young man with a rubber-coated steel bullet in the leg and caused many to suffer the effects of tear gas inhalation. 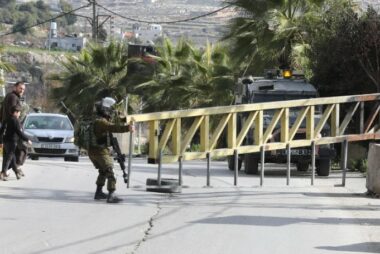 In Bethlehem, the soldiers closed the iron gate at the northern entrance of Tuqu town, east of the city, and prevented the Palestinians from crossing.

The town is subject to frequent invasions and violations, especially since the army repeatedly invades it when the students are on their way to school or returning home, leading to protests.

In related news, Israeli soldiers attacked the weekly processions against the illegal colonies in Beita and Beit Dajan, near the northern West Bank city of Nablus, and injured 21 Palestinians and international peace activists.

Also,  the soldiers injured many Palestinians during the weekly procession in Kufur Qaddoum town, east of Qalqilia, in the northern part of the occupied West Bank.