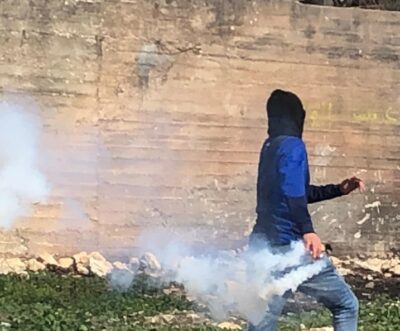 On Friday, Israeli soldiers injured many Palestinians during the weekly procession in Kufur Qaddoum town, east of Qalqilia, in the northern part of the occupied West Bank.

Media sources said the Palestinians marched from the center of the town, chanting against the illegal Israeli occupation, escalating violations, and its colonies, and calling for ongoing struggle until liberation and independence.

They added that the army attacked the Palestinians with rubber-coated steel bullets, gas bombs, and concussion grenades while many protesters hurled stones at the soldiers.

Local medics treated three Palestinians who were shot with rubber-coated steel bullets and many who suffered the effects of tear gas inhalation.

Also, Israeli soldiers shot a young man near the northern entrance of Al-Biereh city, near Ramallah in the central West Bank.

On Friday dawn, Israeli soldiers abducted five Palestinians and injured one in several parts of the occupied West Bank.