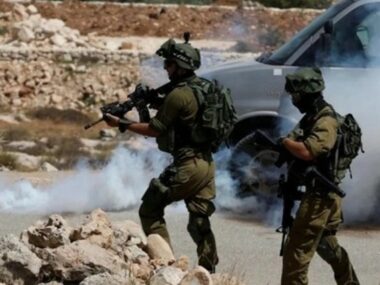 On Friday, Israeli soldiers attacked the weekly processions against the illegal colonies in Beita and Beit Dajan, near the northern West Bank city of Nablus, and injured 21 Palestinians and international peace activists.

The Palestinians, accompanied by international peace activists, marched while chanting against the illegal Israeli occupation, its escalation, and illegal colonies, calling for ongoing struggle until liberation and independence.

The soldiers attacked the protesters with rubber-coated steel bullets, gas bombs, and concussion grenades and chased many while trying to abduct them.

Ahmad Jibril, the head of the Emergency Department at the Nablus office of the Palestinian Red Crescent Society (PRCS), said the soldiers caused 21 Palestinians and three internationals to suffer the effects of tear gas inhalation in Beit Dajan.

Jibril added that the soldiers also caused three Palestinians to suffer the effects of tear gas inhalation in Beit Dajan.

Palestinian medics provided the needed treatment to the wounded in Beita and Beit Dajan.

In related news, the soldiers injured many Palestinians during the weekly procession in Kufur Qaddoum town, east of Qalqilia, in the northern part of the occupied West Bank.

The soldiers injured thousands of Palestinians during these ongoing protests and killed several others, including children.