Soldiers Abduct Five Palestinian, Shoot One, And Use Elderly Man As Human Shield, In West Bank 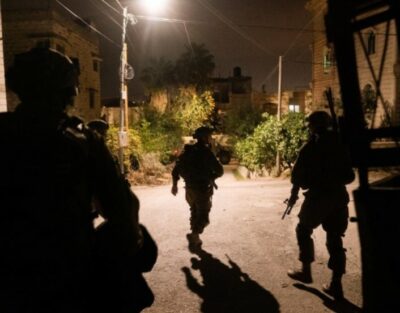 On Friday dawn, Israeli soldiers abducted five Palestinians, injured one, and used an elderly man as a human shield in the occupied West Bank.

In Tubas, in the northeastern West Bank, the soldiers invaded Aqaba town, north of the city, and searched several homes before abducting Soheib Mohammad Abu Arra, 28.

The soldiers also summoned Saif Adnan Shaweesh, Khaled Mohammad Abu Arra, and Khaled Mohamamd Abu Hamad for interrogation at a nearby military base.

In Sur Baher town, south of the occupied capital Jerusalem, the soldiers abducted Monther Hamada after storming his home and ransacking it.

Hamada is the husband of Fadwa, a mother of five who is a political prisoner serving a prison sentence of ten years in Israeli prisons.

In Ramallah, in the central West Bank, the soldiers abducted a young man, Nassr Zobeidi, from his home in the Al-Jalazone refugee camp north of the city.

The Quds News Network said the soldiers also used an elderly man as a human shield during the refugee camp invasion and shot a young man with live fire in the chest, causing a moderate-but-stable injury.

On Thursday evening, Israeli soldiers invaded Hebron city, in the southern part of the occupied West Bank, injured several Palestinians, and abducted Amir Aref Jaber, 18, from the Jaber neighborhood near the Ibrahimi Mosque.

It said the soldiers shot Abdul-Hadi Fakhri Nazzal, 18, in the neck and the chest, inflicting serious wounds before he succumbed to his injuries at a hospital in Jenin, and added that the soldiers also killed Habib Mohammad Abdul-Rahman Kamil, 25, after shooting him in the head.