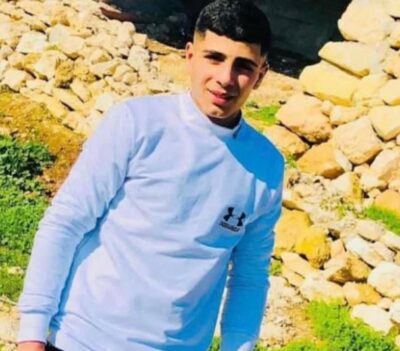 On Wednesday, Israeli soldiers killed a young Palestinian man after he reportedly stabbed and moderately injured an Israeli colonialist settler near Havat Yehuda illegal colony built on stolen Palestinian lands in Hebron, in the southern part of the occupied West Bank.

In a brief statement, the Palestinian Health Ministry said the Civil Affairs Committee informed it that the soldiers fatally shot Sanad Mohammad Othman Samarma, 19, from the Ath-Thaheriyya town, south of Hebron.

It added that Palestinian medics rushed to the scene, but the soldiers refused to allow them to approach the young man to provide essential first aid.

Israeli sources said the injured colonizer, 25 years of age, suffered moderate stab wounds and was fully conscious when the medics arrived at the scene and administered the needed medical attention.

Hours after his death, dozens of soldiers invaded the Ath-Thaheriyya town before storming and ransacking his family’s home, causing excessive damage.

His family said Samamra had nothing to do with the stabbing and added that he was herding the family’s sheep on lands in the Shweiki area, east of the town when the soldiers shot him.