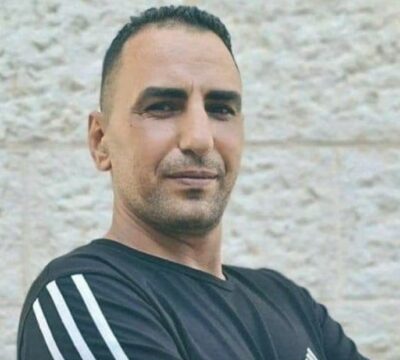 On Thursday dawn, Israeli soldiers killed a Palestinian man in the Qalandia refugee camp, north of the occupied capital, Jerusalem, in the West Bank, and abducted fifteen young men. The slain Palestinian is the fourth to be killed by the soldiers in 24 hours.

The Palestinian Health Ministry said the slain man, Samir Awni Harbi Aslan, 41, from Qalandia refugee camp, was killed after the soldiers shot him with live fire in the chest.

The Health Ministry added that, after shooting and seriously wounding Samir, the soldiers prevented the locals and Palestinian medics from reaching him to administer first aid and move him to a hospital.

According to eyewitnesses, the soldiers shot the slain man when he tried to defend his son, whom the soldiers repeatedly assaulted while trying to abduct him.

“Baba (Dad) help me,” shouted Ramzi, 17, calling on his father, Samir Aslan, to save him from the Israeli occupation soldiers who broke into his home in Qalandia refugee camp, north of Jerusalem, at dawn this morning and arrested him.

At his son’s call, Samir, 41, rushed out of his apartment on the third floor of their four-story building. When he reached the entrance of the building, the soldiers aimed their guns at him and prevented him from coming out, forcing him to return to his home.

Samir could not bear the sight of his eldest son being arrested and handcuffed, knowing very well how brutal and barbaric the soldiers could be. But when he couldn’t see his son, he went to the roof of his building to watch what the soldiers were doing with his son. But as soon as he went up a wooden ladder placed on a wall on the roof, a sniper stationed in another building located directly behind his house shot him.”

National and Islamic factions in Qalandia issued statements mourning the slain man and calling for a general strike in the refugee camp.