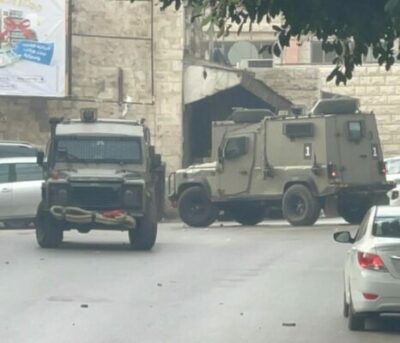 In Bethlehem, the soldiers abducted Bakr Qawwar after storming and ransacking his home in the city, and also invaded the Deheishe refugee camp south of Bethlehem, searched several homes, and abducted Mahmoud Jalham and Ahmad Jalham.

In Hebron, in the southern part of the occupied West Bank, the soldiers invaded the Al-Baq’a area east of the city, searched homes, causing damage, and abducted a teenage girl, Saja Abdul-Rahman Jaber, 17.

It is worth mentioning that a day earlier, the soldiers assaulted and injured Saja for protesting the demolition of two homes owned by her family.

The soldiers also invaded and violently searched the home of Adam Al-Hroub in Deir Samet town, south of Hebron, and confiscated his car.

The soldiers also invaded Ya’bad town, southwest of the northern West Bank city of Jenin, stormed and ransacked many homes, and interrogated several Palestinians while inspecting their ID cards.

The Palestinian Prisoners’ Society (PPS) said the army abducted more than 170 Palestinians in several parts of the occupied West Bank in the first twelve days of January.