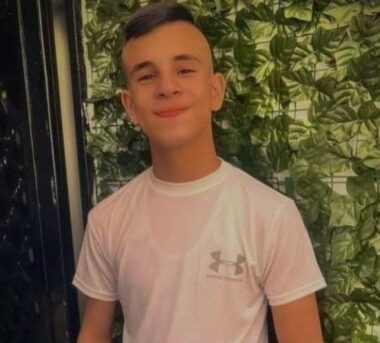 On Tuesday dawn, Israeli soldiers invaded the Deheishe refugee camp south of Bethlehem in the occupied West Bank, leading to protests, and killed a Palestinian child.

Medical sources said the soldiers killed a Palestinian child, Adam Essam Ayyad, 15, after shooting him with a live round in the chest.

The sources said Palestinian medics provided the seriously injured child with the needed first aid and rushed him to a hospital in Bethlehem, but he succumbed to his wounds.

The soldiers also shot another child with a live round in the arm before the medics rushed him to a hospital.

During the searches of homes in the refugee camp, the soldiers abducted a young man Anan Ahmad Sarabta.

The child is the third Palestinian to be killed by Israeli soldiers in the occupied West Bank in the first three days of this new year, 2023.

Last year, in 2022, Israeli soldiers killed 224 Palestinians, including 59 from the Jenin governorate.