Israeli Soldiers Injure Many Palestinians, Abduct One, In Hebron 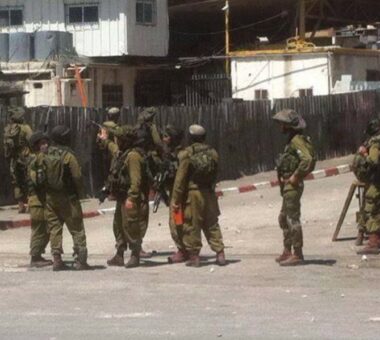 On Thursday evening, Israeli soldiers invaded Hebron city, in the southern part of the occupied West Bank, injured several Palestinians, and abducted one.

Media sources said several army vehicles invaded the southern area of Hebron city and fired many gas bombs at the residents and several shops to force them to leave, leading to protests.

They added that many Palestinians, including several children, suffered the severe effects of tear gas inhalation and received the needed treatment.

The soldiers also abducted a young man, Amir Aref Jaber, 18, from the Jaber neighborhood near the Ibrahimi Mosque.

It said the soldiers shot Abdul-Hadi Fakhri Nazzal, 18, in the neck and the chest, inflicting serious wounds before he succumbed to his injuries at a hospital in Jenin, and added that the soldiers also killed Habib Mohammad Abdul-Rahman Kamil, 25, after shooting him in the head.