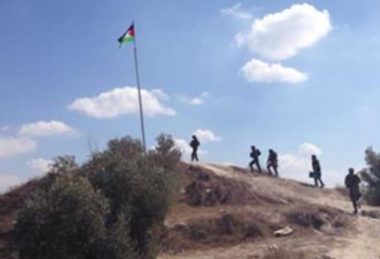 Israeli soldiers invaded, on Friday evening, Sebastia town, north of the northern West Bank city of Nablus, to remove a Palestinian flag and its pole, and shot a young man with a live round.

The soldiers invaded the town from several directions and headed to its center to remove a Palestinian flag and its pole, while firing many live rounds.

Medical sources said a young man, identified as Ahmad Sami Sha’er, was shot with a live round in his thigh, and was moved to Rafidia Hospital, in Nablus.

On Friday at night, the soldiers shot and killed a Palestinian child in the al-‘Arroub refugee camp, north of the southern West Bank city of Hebron, and caused moderate-to-severe injuries to another child.