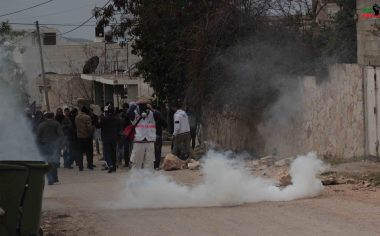 Israeli soldiers invaded, Friday, the town of Kufur Qaddoum, east of the northern West Bank city of Qalqilia, and fired at the protesters, wounding two Israeli peace activists with rubber-coated steel bullets, and causing dozens of protesters to suffer the effects of teargas inhalation.

Morad Eshteiwy, the media coordinator of the Popular Committee against the Annexation Wall and Colonies in Kufur Qaddoum, said the soldiers used excessive force against the local, Israeli and international nonviolent protesters, and fired rubber-coated steel bullets, gas bombs and concussion grenades.

He added that two Israeli peace activists were shot with the rubber-coated bullets; one in the face and the other in his arm, and added that many residents suffered the effects of teargas inhalation.

The soldiers broke into and ransacked many homes in the town, and occupied several rooftops before using them as monitoring and firing posts. They also filmed the protesters, and tried to ambush them in various areas of the town.

On Friday at night, the soldiers shot and killed a Palestinian child in the al-‘Arroub refugee camp, north of the southern West Bank city of Hebron, and caused moderate-to-severe injuries to another child.

On Friday evening, the army invaded Sebastia town, north of the northern West Bank city of Nablus, to remove a Palestinian flag and its pole, and shot a young man with a live round.