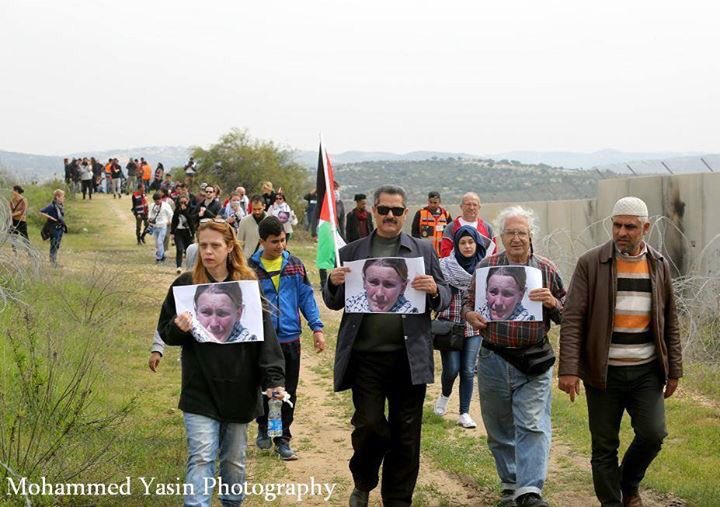 In their weekly non-violent demonstration against the Israeli Apartheid Wall constructed on their land, the villagers of Bil’in, in the central West Bank, held posters showing a picture of U.S. peace activist Rachel Corrie, killed by Israeli forces in Gaza 14 years ago.

The villagers gathered, along with international and Israeli supporters, after Friday mid-day prayers in the center of the village.

They carried signs bearing the iconic image of Rachel Corrie, who was 23 years old in 2003 when she stood up to a Palestinian bulldozer that was destroying a Palestinian doctor’s home. The bulldozer driver her, told her to move, and when she did not move, drove over her, severing her spinal cord and killing her.

14 years later, her family has still not received any justice from the Israeli court system, the US court system, or the International Court of Justice.

On the occasion of the 14th anniversary of her death, Corrie’s parents, Cindy and Craig, issued a statement that, “each March 16th is for us another opportunity to reaffirm our commitment to Gaza. It is a place that overflows with suffering, yet is filled with so much more.  Rachel wrote to us about the people.  ‘…I am also discovering a degree of strength and of the basic ability for humans to remain human in the direst of circumstances…I think the word is dignity. I wish you could meet these people.  Maybe, hopefully, someday you will.’

“During the past fourteen years, we have been blessed with our connections to Palestinians in Gaza, in the West Bank, and elsewhere in the world. We have built relationships with them and with Palestinian and Jewish Israelis who reflect the strength and dignity Rachel recognized, and with open hearts and minds steadfastly pursue justice.”

In Bil’in Friday, to commemorate the anniversary of Rachel Corrie’s death, the villagers marched down to the site of the Wall, constructed in violation of international law and Israeli High Court orders, on farmland stolen by the Israeli military from the villagers of Bil’in. They chanted slogans against the Israeli occupation, and some protesters wrote and painted on the Wall statements calling for Palestinian freedom. After the march and rally, some young protesters scaled the Israeli Wall constructed on their land, hung burning tires from the fence, pulled down razor wire and managed to open a gate.