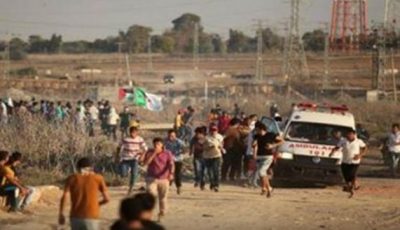 The sources stated that the soldiers, stationed on military towers in Nahal Oz base, across the border fence east of Gaza city, fired many live rounds on Palestinian youngsters protesting close to the border fence, wounding three.

The three wounded Palestinians were shot in their lower extremities, and suffered moderate injuries, before local medics moved them to the Shifa Hospital.

Clashes also reported east of the al-Boreij refugee camp, in central Gaza, while the soldiers fired live rounds, moderately wounding two Palestinians in their legs, before they were moved to the Al-Aqsa Hospital in Deir al-Balah nearby city.