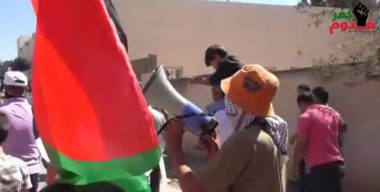 Dozens of Palestinians and international peace activists held, Friday, the weekly protest in Kufur Qaddoum town, east of the northern West Bank city of Qalqilia, demanding Israel to reopen the town’s main road that was closed 14 years ago, and denouncing the death of detainee Yasser Hamdouna.

Morad Eshteiwy, the media coordinator of the Popular Committee in Kufur Qaddoum, said the protesters marched from the center of the town, while chanting against the ongoing Israeli occupation and demanding the release of all political prisoners, held by Israel.

Eshteiwy added that the marches reached the gate that closes their town’s main road, where dozens of soldiers were stationed just a few dozen meters away.

The protesters were holding Palestinian flags, posters of Hamdouna, who died in Israeli custody last Sunday morning, and various other detainees. 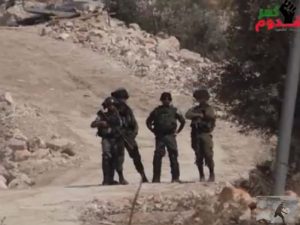 Several youngsters later burnt tires, and placed rocks in the middle of the street, while the soldiers retreated to a distance and, unlike previous weeks, did not invade the town or assault the protesters.

The Popular Committee in Kufur Qaddoum called on the residents, especially young men, to remain alert and avoid walking towards the soldiers, particularly because the army has recently started a new technique in which the soldiers retreat, while others hide behind trees, to ambush and arrest the protesters who march in their direction.