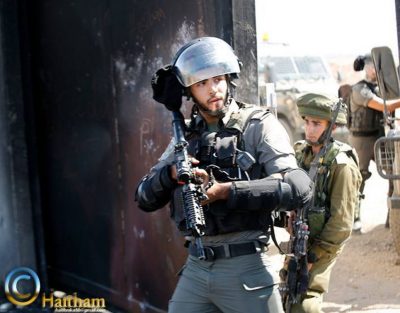 The Popular Committee in Bil’in said the protesters marched towards the gate of the Annexation Wall, before the soldiers assaulted them, and kidnapped five, including two Palestinians who were forced out of a car.

The Committee added that the soldiers also abducted two activists; one Israeli and one from Britain.

The protesters marched towards the memorial of Bassem Abu Rahma, where he was killed after a soldier fired a gas bomb that directed struck him in the chest, in April of 2009.

It is worth mentioning that Bassem’s sister, Jawaher Abu Rahma, was killed by the army on January 1, 2011.

The soldiers also assaulted journalists and forced them away, under the allegation that the area is a “closed military zone.”

The Popular Committee said the protests will continue despite the escalating Israeli violations, and added that the Palestinians are protesting for their legitimate rights, for their lands and livelihoods.