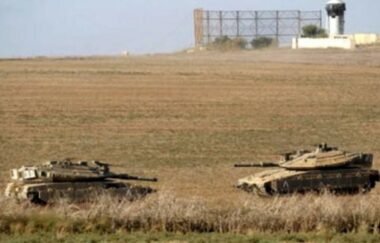 They added that the vehicles invaded the lands through the as-Sreij gate of the perimeter fence, before bulldozing sections near the fence and installing sandhills.

The invasion took place shortly after the Israeli army and the navy attacked many Palestinian farmers, and fishermen, in the Gaza strip, causing damage, and forcing the Palestinians to leave.

The army repeatedly opens fire at Palestinian farmers, workers, and shepherds near the fence across the eastern parts of the Gaza Strip, in addition to the constant attacks targeting the fishermen and their boats in Gaza territorial waters, leading to dozens of casualties, including fatalities, in addition to serious property damage and the confiscation of many boats after abducting the fishermen.