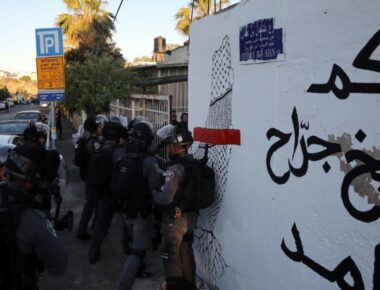 A paramilitary Israeli colonizer opened fire, Monday, at a young Palestinian man and injured him, during a nonviolent activity in solidarity with the families of Sheikh Jarrah neighborhood, in the occupied Palestinian capital, Jerusalem, in the West Bank.

Media sources said many Palestinians were carrying flags and chanting against the escalating Israeli violation against them, especially the ongoing displacement of the Palestinians in Sheikh Jarrah and the other parts of the occupied city.

They added that a paramilitary colonizer opened fire at the nonviolent protesters, mildly injuring a young man in the leg.

Israel soldiers closed the entire area while groups of fanatic colonizers gathered and chanted racist slogans against the Palestinians, calling for their expulsion from occupied Jerusalem.

It is worth mentioning that the Israeli High Court will be holding a hearing, today, to look into appeals filed by four families (al-Kurd, Eskafi, al-Qassem, and al-Gha’ouni), about a month ago, against the ongoing attempts to kick them out of their homes to replace them with the illegal colonizers.