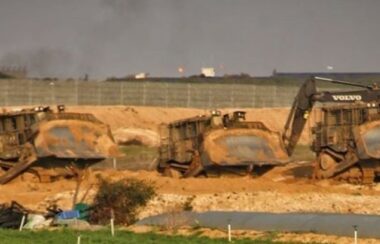 Media sources said six armored military bulldozers advanced dozens of meters into the Palestinian lands east of Deir Al-Balah, in central Gaza, and started bulldozing and leveling them for the second day.

The sources added that the soldiers fired many live rounds and high-velocity gas bombs at farmers and their lands near the perimeter fence east of Khan Younis, in the southern part of the Gaza Strip.

The attacks did not lead to casualties but forced the Palestinians to leave their lands to avoid further Israeli escalation.