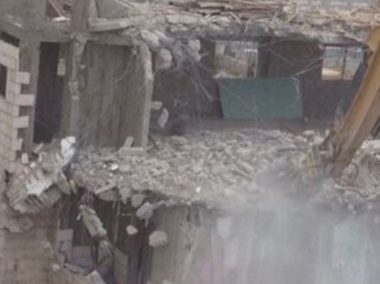 The Israeli army issued, Sunday, demolition orders targeting a number of inhabited and under-construction homes in Khallet al-Nahel and Khallet al-Qotin areas, southeast of Bethlehem, in the occupied West Bank.

Hasan Breijiyya, the coordinator of the National Commission against the Annexation Wall and Colonies in Bethlehem, said a large military force invaded the two areas and handed the demolition orders to the families.

He added that the orders targeted seven homes, some are inhabited, and some are still under-construction.

Owners of two of the homes have been identified as Ahmad Ismael Mezher and Mohammad Yahia Ayyash.

Mezher told the Palestinian News & Info Agency (WAFA) that he previously received similar orders, and filed all needed documents to obtain permits, but never received a response from the “Civil Administration Office,” the executive branch of Israel’s illegal occupation of Palestine.

The two areas, as well as many Palestinian communities, are subject to frequent invasions and demolition of homes and property, amidst Israel’s ongoing illegal construction of expansion of its colonies, in direct violation of International Law and the Fourth Geneva Convention.