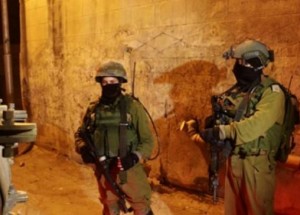 Dozens of Israeli soldiers invaded, on Saturday at dawn, the Qalandia refugee camp, north of occupied Jerusalem, searched many homes and kidnapped a young man. The soldiers also released a woman who was also kidnapped at dawn.

The soldiers searched many homes in the camp, kidnapped a young man, identified as Husam Nafez al-Ashhab, and took him to an interrogation center in Jerusalem.

In addition, the army released an elderly woman, identified as Zeinat Husam Oweida, 63, after kidnapping her at dawn, and interrogating her for four hours in an interrogation facility in Jerusalem.

She said that she was ordered to go to the District Court at seven in the evening, and that she will also also have to head to the al-Maskobiyya detention and interrogation center, on Sunday at eleven before noon.

Oweida was taken prisoner from her home in the al-‘Isawiyya town, in the center of Jerusalem, after the soldiers violently searched the property, and confiscated pictures and a sum of cash.

She was previously repeatedly detained for protesting against the provocative tours carried out by Israeli extremists, and the police, into the courtyards of the Al-Aqsa Mosque in Jerusalem.