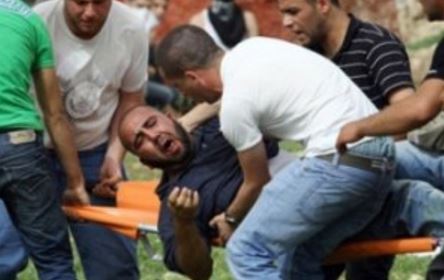 Palestinian medical sources have reported, Friday, that two Palestinians were shot and injured, and many others suffered the effects of tear gas inhalation, after Israeli soldiers assaulted a nonviolent procession in Ezbet at-Tabib village, in the northern West Bank district of Qalqilia.

The sources added that the two Palestinians suffered mild-to-moderate injuries, after the soldiers shot them with rubber-coated steel bullets, and were moved to a local hospital.

Local medics of the Red Crescent medics also provided the needed medical treatment to many who suffered the effects of tear gas inhalation.

The residents started their protest by marching from the village towards Palestinian orchards close to settlement road #55, before the soldiers assaulted many with clubs and batons, and fired gas bombs and rubber-coated steel bullets.

Eyewitnesses said the soldiers also detained four international peace activists, and took them to a nearby military base.