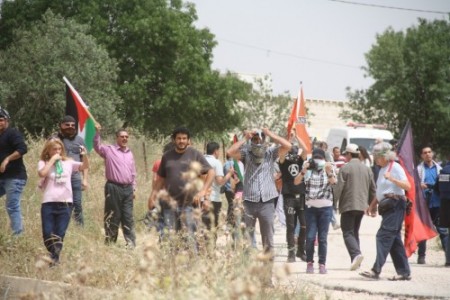 The Popular Committee Against the Wall and Settlements, in Bil’in, said the protesters marched in the village, carrying Palestinian flags, chanting for national unity, in addition to ca lling for removing all Israeli colonies from occupied Palestine, ongoing resistance and the release of all detainees.

Israeli soldiers fired rubber-coated steel bullets, gas bombs, and concussion grenades on the protesters and chased many of them in the Palestinian orchards.

The Popular Committee said that the head of Bil’in village Council Bassel Mansour, 40, was shot with a gas bomb in his leg, while dozens of locals, Israeli and international peace activists suffered the effects of tear gas inhalation.
Israeli gas bombs and concussion grenades also led to fires in large areas of olive orc The Popular Committee in Bil’in said that, as the Palestinians mark the 68th anniversary of Deir Yassin massacre, the history of the Israeli occupation continues to be a history of massacres and

war crimes against the Palestinians, their homes and lands.

It also called on the local and international, legal and human rights group to ensure the prosecution of Israel in international courts for its ongoing crimes against the Palestinian people.

Deir Yassin Massacre took place on April 9 1948, when the Irgun and Stern terrorist Zionist armed organizations attacked the village of about 750 Palestinian inhabitants and killed more than 250-350 men, women and children; fifty-three orphaned children were left along the wall of the Old City.