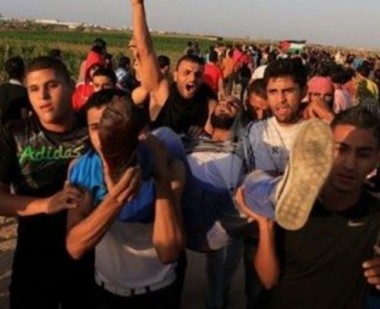 Israeli soldiers shot and injured, on Friday, at least ten Palestinians, including four with live fire, in the Gaza Strip.

Medical sources said two Palestinians were shot with live rounds after the soldiers, stationed across the border fence, opened fire on dozens of protesters. The two were moved to the Shifa Hospital suffering moderate wounds.

The clashes took place east of the Sheja’eyya neighborhood, east of Gaza city; the soldiers who opened fire on them were stationed in the Nahal Oz military base, across the border fence.

The sources added that scores of residents suffered the effects of tear gas inhalation, and received the required treatment without the need for hospitalization.

Two Palestinians were also shot with live Israeli army fire east of the al-Boreij refugee camp, in central Gaza, and were moved to a nearby hospital.