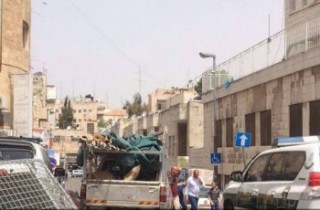 Israeli soldiers invaded, on Friday afternoon, the Ein al-Louza neighborhood in Silwan town, in occupied Jerusalem, and kidnapped six Palestinians. The soldiers also removed and confiscated a protest tent in the town.

The Wadi Hilweh Information Center in Silwan (Silwanic) said dozens of soldiers, and police officers, invaded the neighborhood, and confiscated a protest tent installed by the residents in cooperation with the Committee for Defending Silwan Homes.

The tent was installed by the residents to protest Israel’s plan to demolish a number of Palestinian homes in Silwan.

In addition, the army kidnapped Jawad Siyam, the head of the Wadi Hilweh Information Center, after accusing him of attempting to block traffic to prevent the soldiers from arresting the above-mentioned Palestinians.

He was released later, and was given an interrogation order in the Police Station in Salaheddin Street, in Jerusalem, in addition to being ordered to pay a fine.