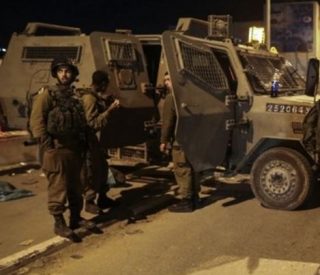 In addition, soldiers stationed on the Huwwara roadblock, south of Nablus, stopped and searched dozens of cars, and kidnapped one Palestinian, identified as Tamer Tayel Odah, 37.

It is worth mentioning that the soldiers withdrew from the rooftops of ten Palestinian homes in Huwwara town, after continuously occupying them since Sunday.

Owners of some of the invaded homes have been identified as Bassam Nasrallah Hanani and Yousef Hasan Hilali.

In related news, the soldiers kidnapped Baha Ahmad Tahayna, 27, while heading to work in Jerusalem, allegedly for “trying to enter Israel without a permit.” Tahayna is from Sielet al-Harethiyya town, west of Jenin.

In Tulkarem, in the southern part of the occupied west Bank, the soldiers invaded Deir al-Ghosoun village, north of the city, searched homes and kidnapped one Palestinian, identified as Ahmad Zaki Khaliliyya.