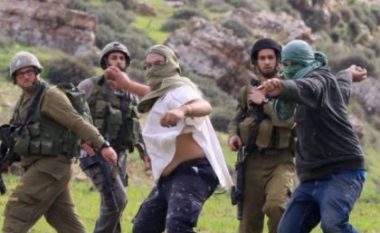 Two Palestinian security officers were injured, on Monday evening, after a number of fanatic Israeli settlers hurled stones on their car, driving on the Yitzhar road, south of the northern West Bank city of Nablus.

Israeli soldiers arrived at the scene, before an Israeli ambulance came over and provided them with the needed medical treatment, as the road is under full Israeli military and security control.

The two Palestinian officers suffered mild-to-moderate injuries; they were later moved by local medics to a Palestinian hospital.

The Israeli army did not stop or question any Israeli settler in the area following the attack.

Meanwhile, the soldiers closed the main Huwwara road, near Nablus, blocking all Palestinian traffic, after an Israeli colonist claimed stones were hurled on his car.

The soldiers stopped and searched dozens of cars, and examined the ID cards of many Palestinians while interrogating them.