Israeli Army Orders A Palestinian To Halt Construction Of His Home 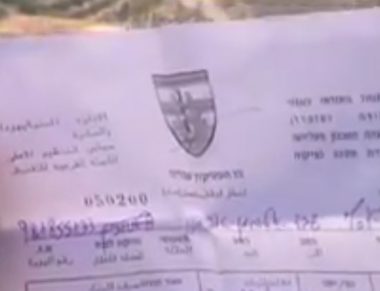 Israeli soldiers invaded, Tuesday, the al-Walaja village, west of Bethlehem city in the occupied West Bank, delivered an order instructing a Palestinian to halt the construction of his home, and summoned three home owners for interrogation.

He added that the army is alleging the Palestinian is building his 100 square/meter home without a permit from the Israeli Civil Administration office, in the occupied West Bank.

The soldiers also summoned three other Palestinians for interrogation regarding their recently built homes in Ein Jweiza area, in al-Walaja.

It is worth mentioning that al-Walaja has been subject to constant Israeli violations, including the illicit confiscation of lands and the demolition of homes and property, as part of Israel’s illegal colonialist activities in that area.

Most of the Palestinians in al-Walaja are refugees, and their village was among hundreds of villages and towns, which were destroyed and depopulated before and after Israel was established in the historic land of Palestine.

On Tuesday morning, the soldiers invaded the al-Jiftlik Palestinian village, in the Central Plains of the occupied West Bank, demolished one home and abducted its owner.

In early September of this year, the soldiers demolished four homes, and injured sixteen Palestinians, in al-Walaja.